RT London was offered the opportunity to help with the first full renovation on Fletcher Hall, one of the vintage residence halls on the campus of University of Wisconsin Oshkosh. The residence hall contains 500 beds. 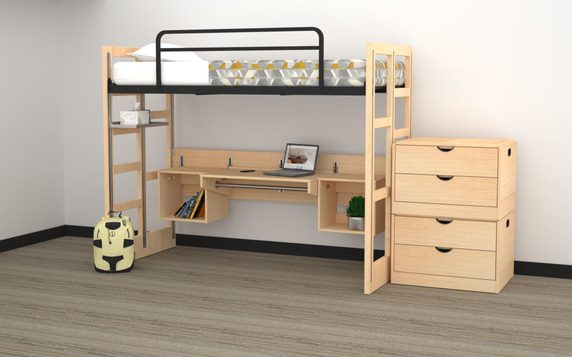 UWO wanted to create a statement by trying something different in the student rooms. They were looking for a furniture manufacturer that could provide a progressive room solution, with the ability to accommodate their custom needs and special requests. Meeting their specifications would be the top criteria, ability to deliver on schedule, and price would also be critical. What UWO described as their preferred product was similar in many ways to what Evolve Room Solutions would incorporate – RT London invited UWO to NeoCon 2016 to have a first look. From that point forward, UWO began to base their specification on Evolve. RT London took Evolve on the road to UWO and did a full set-up and presentation, which included obtaining student feedback. In the process of discussing design details, some significant updates requested were shorter headboards to accommodate their lower ceilings and a stabilizer rail with hanging capabilities. Minor tweaks included deeper cubbies, a worksurface with a pencil stopper and a custom 2-drawer stacking dresser. Working closely with the facilities team, RT London designers and engineers were able to modify existing components to create custom pieces that met the budget and would provide exactly what UWO was looking for.

previous next
View All Collections
TOP